"Imagine a RAID as a hard drive that doesn't fail, reads and writes at breakneck speed and has 8x more capacity than the largest hard drive on the market." 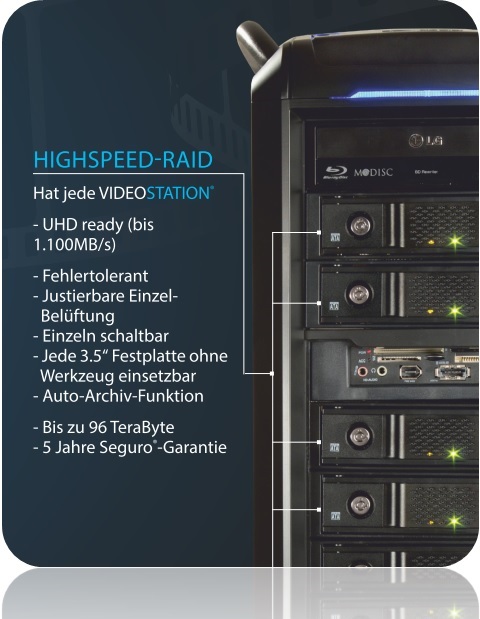 NEW! With our SEGURO® RAID hard disks up to 96 TeraByte are now possible! These hard drives also come with a 5-year warranty. You can't keep your projects ready for access more securely.

The RAID is practical and uncomplicated to use!
Under Windows it appears as a logical drive letter, for example F:, This can be up to 96 TeraByte in size and is exceptionally fast (up to > 1,000MB/s)!

If desired, you can divide this huge capacity into several drive letters. You can then use these logical drives for your own purposes, e. g. for photos, video, projects, etc.

Integrated storage solution based on RAID, an error-tolerant (redundant) mass storage method, consists of an array of individual (independent) hard disks. This combines several advantages for processing the large amounts of data produced in video production:
Large capacities (up to 96 TeraByte) with very high speeds (up to more than 1,100MB/sec) which are also fault-tolerant and flexibly divisible.
This clever solution is included in every* VIDEOSTATION® and allows a variety of variations for processing high-resolution ingest (4K, 6K and 8K codecs or RAW formats).
*VIDEOSTATION® Montaña has lower capacities and speeds

How do I decide what type of hard disk storage to purchase for my video editing?


The demand for hard disk space with terabyte capacities has long been the norm for video editing. Individual hard disks are unsuitable due to the risk of failure and solid state disks (SDS) are expensive and slow down over time. So which criteria are decisive for the purchase?

- Speed: If you want to start both Windows and powerful applications lightning-fast, you nowadays rely on a solid state disk (SSD). The increase is the RAID contained in every VIDEOSTATION®, only with comparatively much larger capacities and long-term reliability. It makes your storage fast and large enough for high-resolution, uncompressed video. If you work with at least Full HD video, this can become a criterion. Because it also depends on the codec. For example, a video-capable memory becomes obligatory for AVIDs DNxHD. VIDEOSTATION® delivers up to 80 terabytes of storage from the factory with data transfer rates of up to 1,100MB/s!


- Interface: Which interface is available at all? Common on PCs and MACs are USB, eSATA, Firewire 400 and 800 as well as the network interface. Newer versions are Thunderbolt, M. 2, USB 3.1, iSCSI and AoE (ATA over Ethernet).

- Capacity: How much storage do I need? Do I want to delete my projects immediately after completion? Or should they be archived? It may even be material that has been collected over the years or is to be stored for such a long time.

- Fault tolerance: The fault tolerance ensures that the data remains undamaged in the event of a hard disk failure and can also be processed further. The combination of several hard disks (RAID) makes this possible.


In order to store video and output of multiple tracks* from high-resolution material to uncompressed streams, the storage hardware must be carefully selected.

VIDEOSTATION® is inherently equipped with such a video memory and can be extended externally to more than 100 terabytes. In addition, the high storage speeds that are not attainable with normal PCs are possible.

NEW! The DataSilo with THUNDERBOLT!
An external memory for your video recordings! The DataSilo comes as a little tower with 8 slots for upgrades to max. 32 TeraByte (= 32.000 GB). Pre-configured versions with 8, 16, 24 and 32 TeraByte are available.
Important for film and video producers thereby are the various interfaces: USB 3.0/2.0, eSATA, Firewire 800, iSCSI and ATAoE. The DataSilo is quiet and compact and therefore suitable for both the studio and for mobile use!
Ask for exclusive 0%-financing.

Item in the webshop

Benefits of an RAID in Adobe Premiere Pro CS6


RAID enclosures for up to 6 SATA hard disk drives can be exchanged while the system is running. No tools are required. 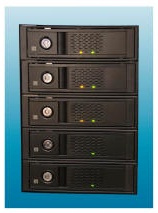 Each bay is equipped with 2 lights indicating the operational status. The green light indicates that the bay is operational, the yellow one that the bay is currently occupied. Therefore, a failed disk can be easily identified, when a Windows monitoring program simultaneously indicates an instability within the RAID system. The user then instantly knows which disk is being affected and has to be exchanged. Usually, this is a feature of pricey stand-alone solutions - with VIDEOSTATION, it is included in the purchasing price!

VIDEOSTATION-Performance on SSD-like RAID 0 up to 32TB.

Performance comparison of a VIDEOSTATION RAID with a single hard drive disk.